As fans of comedy around the world mourn the death of Jerry Lewis at 91, we decided to take a moment to focus on the jewelry choices of this fine comedian…and what an interesting story to share.

According to a classic movie blog, Lewis frequently–if not always–wore two rings in any film he appeared, regardless of whether it was appropriate for the character (which it often wasn’t).

No matter what character he played, it appears Jerry Lewis almost always wore two rings. One looks like a large gold wedding ring, which is weird, because he tended to play single characters: 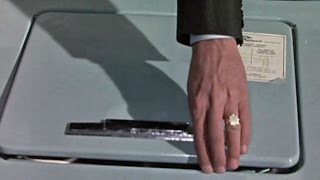 The other is a pinky ring with an enormous sapphire (which can be seen in the photo above).

These rings almost never fit with Lewis’ characters, who tended to be not only single, but not wealthy enough to afford such fancy jewelry.

In fact, I don’t know for sure why he had to wear either of those rings, regardless of the character he played. I can’t think of any actor more determined to keep a personal piece of himself in every performance like that…

There’s speculation as to why he was so determined to wear these rings, regardless of the film, including Dean Martin who thought Lewis was simply “flaunting his wealth.”

Knowing jewelry the way we do, we have a different guess: each ring must have had enormous personal importance to him, possibly in the same vain as good luck charms he felt compelled to wear throughout much of his life, not just in films.

Regardless of the reason, let’s say farewell to Mr. Lewis and the real charm he possessed: an amazing sense of humor.