Is it even possible to put the media storm aside to discuss something as seemingly bland as his watch collection? Here’s at Joseph Schubach Jewelers, we think so. So let’s focus on Sheen’s time pieces instead. Let’s be horribly boring. Well, not that boring, since he has an estimated 5.6 million dollar watch collection! Sheen wears a Rolex Yachtmaster on his previous television series and many of us heard the story of the $150,000 Patek Philippe 5970 that went missing during a stay in at the New York Plaza Hotel in 2010, after which Sheen accused his date of stealing the watch.

The watch that Charlie Sheen claims he lost during the night of his hotel meltdown ain’t no ordinary Timex … dude was wearing one of the most sought after watches on the planet … valued at $150,000. 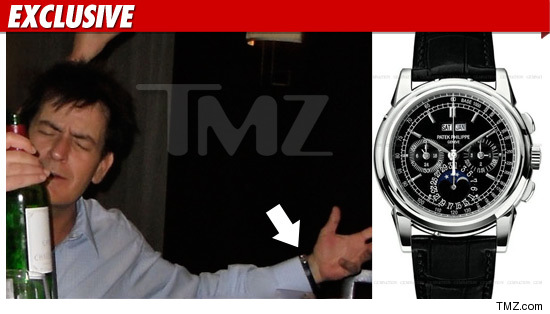 Sources familiar with the situation tell us Sheen was rockin’ a Patek Philippe 5970 … a watch that one expert tells us is always in “crazy high demand” with collectors.