This story is getting quite a lot of online airplay recently, but we’re not surprised here at Joseph Schubach Jewelers. We see it firsthand: men want to still “wow” their spouse-to-be but how can budget not be an issue in this economy. Of course, our resounding answer is moissanite, where you get more bang for your buck as well choosing something ecologically sound.

Men planning their weddings are cutting back on what they spend on an engagement ring – and their fiancees are not happy. Traditionally, a ring has tended to cost around up to three months’ salary – but now many grooms-to-be are devoting only three weeks’ income to the crucial purchase. Research by home insurance firm LV found that nearly two-thirds of grooms are paying less than a month’s salary.  John O’Roarke, LV’s managing director, said: ‘It’s not surprising to see men tightening their belts in these tough economic times.

Regardless of how much a ring is worth, it is still a treasured possession.’ More than half of the women surveyed said they did not how much their engagement ring was worth. But most said they expected their man to spend at least one month’s salary on the ring. Nearly four in ten grooms refused to reveal what they paid, and three per cent admitted that they exaggerated the cost. 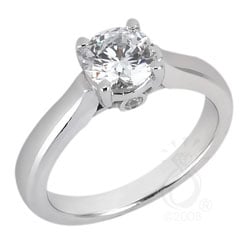 Cathedral engagement ring with two bezel set round brilliant diamonds. Fits a 6.5mm (1ct) round center stone. (setting only, does not include center stone) 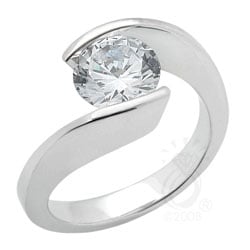