Jewelry as a form of art and investment is becoming increasingly popular. Read on (and click on image below to enlarge): 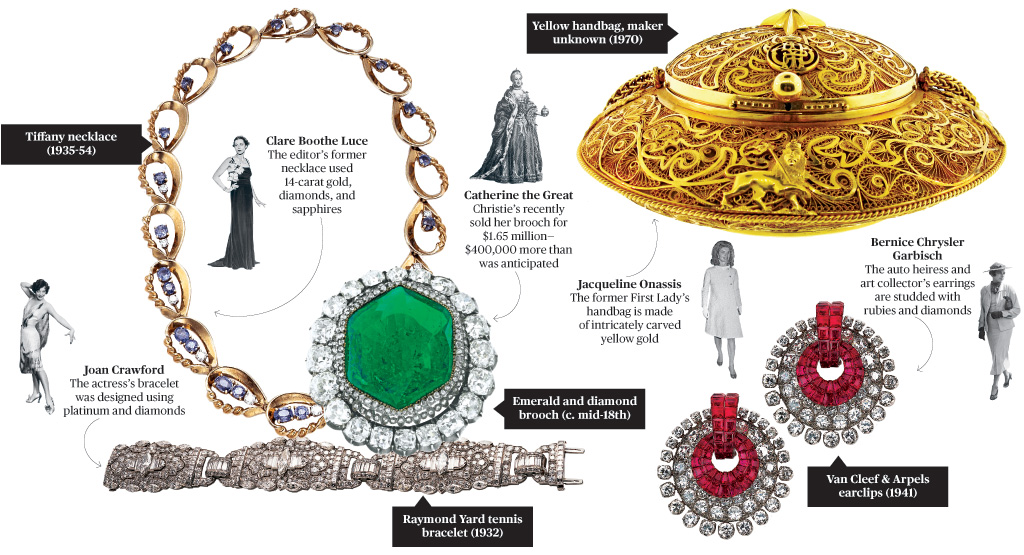 These pieces are included in the Museum of the City of New York’s current “Notorious & Notable: 20th Century Women of Style” show. It’s the latest in a growing number of exhibitions treating vintage jewels and accessories as miniature sculptures and objets d’art.

With the art market still very much in recovery mode, collectors are turning to jewelry not only for its artistic value but also for its investment potential. “Since the start of the recession we’ve seen a growing number of new and established collectors come into the market with particular interest in buying jewels as an alternative asset or as a hedge against inflation,” says Rahul Kadakia, Christie’s head of jewelry.

Feeding the craze, museums and galleries around the world are hosting more historical and thematic exhibitions than ever dedicated to 19th and 20th century jewelry. Last year, Lalique and Cartier curated museum shows that toured the country. Next year, Van Cleef & Arpels will mount a retrospective of its work at the Cooper-Hewitt National Design Museum in New York. “The public’s perception of jewelry has absolutely changed. Clients and collectors now have a greater appreciation for fine jewelry as an art form,” says Kadakia.

To a point. Many savvy collectors are also drawn to such pieces because of the increase in the investment value of diamonds and gold, and recent auction sales have reflected this enthusiasm. Kadakia cites Cartier’s multicolored- gem-encrusted “Tutti Frutti” bracelet as an example of the market’s extraor- dinary growth. The limited-edition designer piece fetched about $300,000 at auction 10 years ago. Today prices consistently exceed $1 million. In April, Sotheby’s sold a gold, platinum, and diamond David Webb panther bracelet for $134,500, nearly three times its pre-sale estimate. That same month, Christie’s sold a diamond and emerald brooch once belonging to Catherine the Great for $1.65 million—$400,000 more than its anticipated price.

More experienced collectors are trending toward unique period jewels and pieces from top-tier jewelry houses. It’s a good strategy, Kadakia says, one that has canny buyers seeing positive returns over the long term. One example of a period piece with currency is the Bulgari Blue Diamond ring, a gold band flanked by two enormous triangular diamonds, which will headline Christie’s New York’s Jewels sale this month. Purchased for $1 million in the 1970s, when it was designed, Christie’s expects it to field more than $12 million this time around.