Colored diamonds and gems seem to do particularly well in Spring. They possess radiant and colorful bursts of color, bound to appeal to anyone desperately wanting a change from a long, dark Winter.

One stunning piece at Christie’s auction last week in NYC was sold while another remained without a home.

(above) This 40-carat cushion-cut sapphire, mounted in platinum and
believed by the GIA to have originated from Burma (Myanmar),
sold for $542,500 at Christie’s New York “Magnificent Jewels”
auction this week.

Christie’s New York Magnificent Jewels auction realized total sales of $31.8 million April 12 but its top lot, the 10-carat purple-pink diamond (shown below) and estimated to bring in between $12 and $15 million, did not sell.

“While we were disappointed that the 10-carat purple-pink diamond did not find a buyer, top-quality white, blue, pink and yellow diamonds fared very well, with a strong price of $3 million, or $1 million per carat, achieved for a fancy vivid blue diamond,” Rahul Kadakia, head of jewelry for Christie’s Americas, said.

The auction’s top seller was a rectangular-cut 37-carat diamond (below), flanked on either side by three graduated baguette-cut diamonds, mounted in platinum and selling for $4,450,500 to a private collector.

A signed 1959 pear-shaped 16-carat diamond ring by Van Cleef & Arpels (below), flanked on either side by tapered baguette-cut diamonds and mounted in platinum, sold for $1,082,500.

“In all, five jewels exceeded the $1 million mark, with heavy competition among both trade buyers and private collectors for colorless diamonds, large gemstones and signed jewels,” Kadakia said. Christie’s will be holding three additional jewelry auctions this month, in Amsterdam, London and Dubai.

You might want to stop at the ATM first.

Our breathtaking Gemesis pieces are much more affordable than Christie’s latest offerings, yet still contain that “pow” of Spring color. 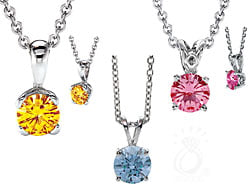