Looks like moissanite is fast becoming something other a spectacular diamond alternative for jewelry. This piece explains how moissanite is allowing from strides in science and technology because of its affordability and strength in characteristics: 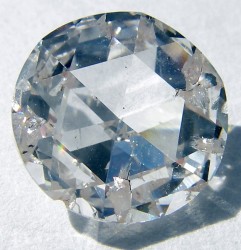 A synthetic diamond, pictured above, may be produced with certain flaws in order to act as quantum bits for experiments in computing.

UCSB quantum specialists recently published a paper in the Proceedings of the National Academy of Science with the results of their latest studies in diamond quantum mechanics. According to their findings, the defects found in diamond crystals may lead to the production of a quantum computer.Chris G. Van de Walle, professor of materials at UCSB, said carbon atoms in a diamond crystal are arranged in what is known as a “regular array.” Defects in this array — like missing atoms or impurities — give the diamonds their certain qualities, such as coloration. Van de Walle noted, for example, the famous blue hue of the Hope Diamond, and said such qualifying defects have been known by scientists for years.

“Such defects in diamond have been studied for many decades,” Van de Walle said. “It is only within the past few years, however, that the applications for quantum information processing have been realized, and the group of professor [David] Awschalom has been at the forefront of this research.”

UCSB professor David Awschalom heads the group of researchers involved in the diamond study and corroborated with Van de Walle to take steps in rendering the defective studs useful.

“I myself had been doing research on defects in semiconductors, mostly aimed at suppressing or eliminating ‘bad defects’, because they lead to the failure of devices,” Van de Walle said.  “Professor Awschalom knew of this expertise, and suggested we would collaborate and apply our knowledge about defects for the creative purpose of designing ‘good’ defects, that are useful for quantum information processing.”

Van de Walle said scientists can use the quantum-mechanical properties of an electron that can be bound to the defective diamond to act as quantum bits or as he called them “qubits.” This, he said, far exceeds the zeros and ones which form the language, or “binary logic”, of current computers.

“Quantum computing uses qubits that are continuously variable between zero and one, and hence offer infinitely more possibilities to be manipulated and combined with other qubits to produce a desired computational result,” Van de Walle said.

Van de Walle said the quantum computers, which would store and manipulate information in the form of quibits, enable completely new algorithms and applications in computing. According to Van de Walle, cryptography would evolve in more secure ways, greatly benefiting military and banking systems. Van de Walle said quantum algorithms can also offer tremendous speed improvements for searching through large amounts of data, or solving problems in physics or chemistry.

However, as any groom-to-be knows, a diamond costs a pretty penny.

“The centers in diamond perform very well as qubits, but diamond is an expensive and difficult material to work with,” Van de Walle said. “For instance, it is the hardest material known, which makes it very hard to cut or process.”

As revealed in their recent PNAS publication, the group primarily focuses on identifying defects in materials which have properties similar to diamonds, but far less expensive.

“Our systematic, exploratory research in this area is what we refer to as a ‘road map,’” Van de Walle said.

The team, Van de Walle said, has taken interest in materials such as silicon carbide, known more commonly by jewelers as “moissanite.” Aluminum nitride is another material, Van de Walle said, with a lot of potential, since it is already used to fabricate light-emitting diodes and transistors.

Van de Walle said he and his team hold high hopes for their project, and hope the “road map” will lead them to a fruitful destination.

“To come up with a new type of ‘defect’ that will be as good as, or even better than, the defects in diamond,” Van de Walle said. “That would be an important step to the practical realization of a quantum computer.”