We see your back for another Joseph Schubach jewelry lesson. We had a feeling you’d return. So boys and girls, today a quick introduction to Elizabethan jewelry, thanks to the people at Elizabethancostume.net.

Compared to the complex faceted cuts used on modern gems, the art of gem faceting in the 16th century was quite rudimentary. The common cuts of today’s stones were not in use in the 1500s, which can make finding authentic-looking jewelry difficult. In the 16th century most gems were cabochon cut, with a smooth, rounded top, or table-cut (a cabochon with the top cut off, creating a flat surface.) They were oval or square in shape.

For very hard stones, like diamonds, a pyramid-cut which created a pointed gem was used. Later in the century the hog-back cut was invented (beveling the table-cut gem around the edges to create what we consider the classic “emerald” cut), and around 1600 the rose-cut, which made gems glitter and sparkle more. There was, however, a great deal of complex gem-carving in the 16th century. Cameo carvings were popular, as were semi-precious stones carved into the shape of ships, women, and animals. Gems used in 16th century jewelry included the diamond, ruby, emerald, opal, topaz, and sapphire. Other hard stones, used for beads and cameos, included turquoise (called “Turkey stone”), carnelian, jasper, onyx, bloodstone, moss agate, chalcedony, crysoprase and sardonyx. Freshwater and sea pearls were both used.

In the 16th century, the goldwork of a piece of jewelry was as esteemed as the jewels it surrounded. The modern prong-setting for jewels was rarely seen. In the early 1500s the settings for jewels were often plain gold wrapped around the bottom of the gem, but after 1540 they began to become more and more elaborate, often imitating petals or acanthus leaves, sometimes more impressive then the jewels themselves.

Pearls were also an integral aspect of 16th century jewelry. They could be worn singly, in strands. They could be clustered in twos and fours and combined with goldwork to create elaborate billiments, necklaces or girdles. They could be sewn to clothing singly, set in elaborate goldwork settings, or used to decorate hairstyles. Goldwork, especially goldwork depicting a particular scene or item, was often enameled with colored glass. To moden eyes this tends to look “cheap” in comparison to plain gold and jeweled items, but it was very much to the taste of 16th century women. 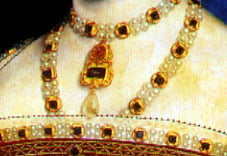 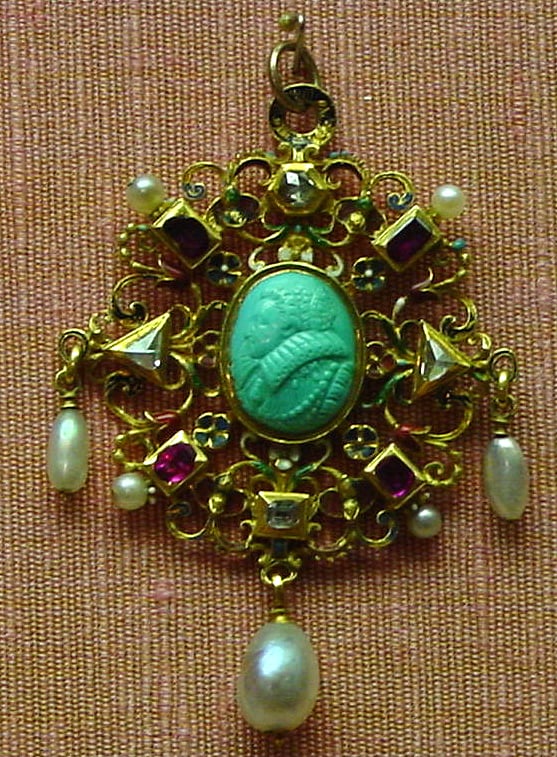 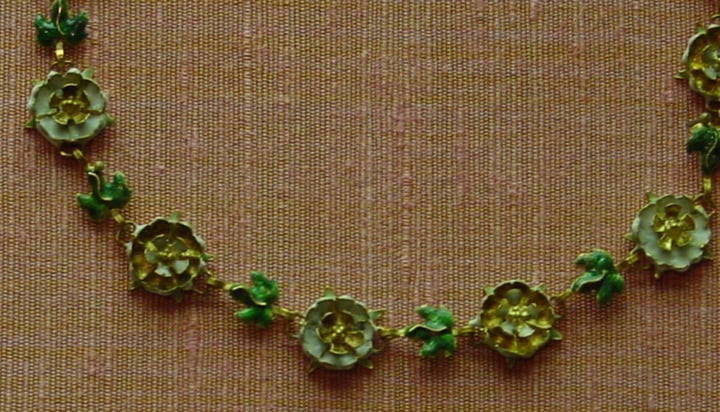 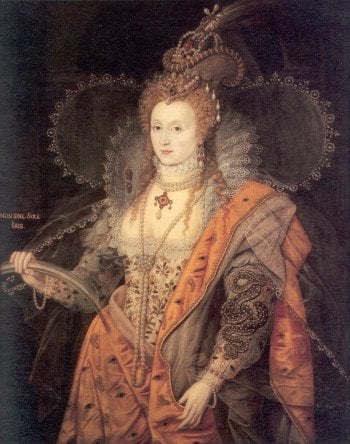