A client came to us with a question:

“My girlfriend works for an ecological organization. During our last few years together, I’ve learned about the hazards of diamond mining. I want to propose to her on the holiday but I need some suggestions as to a diamond alternative.” – Freddie G., Phoenix

Freddie, you asked the right company. Joseph Schubach Jewelers prides itself in it’s eco-friendly options. Top of the list would be moissanite. According to Charles & Colvard:

Moissanite, also known by its chemical name, silicon carbide (SiC), is a naturally occurring mineral found in very limited quantities or as minute particles in the earth. The rarity of natural moissanite crystals large enough for jewelry prohibits their use.

For years, scientists tried to re-create this extraordinarily brilliant material. Only recently, through the power of advanced technology, Charles & Colvard developed a way to produce in a laboratory, large gem-quality crystals which can be faceted into near-colorless jewels with incomparable fire and brilliance.

So these lab-produced gems have the same physical, chemical and optical characteristics as their natural counterparts. Often trained gemologists can’t tell the difference. These “synthetics” are distinguished from “simulants,” like glass or cubic zirconium.

As you can see, an option like moissanite is a smart choice for ecologically minded people. It is in fact a diamond, it’s simply produced in a lab. 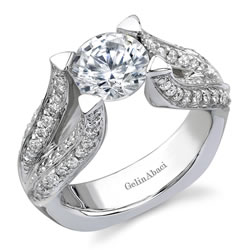 Tension Set Engagement Ring With A Round Moissanite And Side Diamond