Here are a few more points on moissanite you want to ponder:

Moissanite is very hard – it is harder than every jewel except diamond. Moissanite jewels are durable and resist chipping.

Moissanite comes in different grades of color and clarity. FALSE.

There is only ONE quality of moissanite – “very good” that is distributed to the public by Charles & Colvard. That said, each Moissanite jewel is unique and no two are identical. Moissanite retailers match moissanite stones from thousands of stones for pendants, earrings and bracelets. Some moissanite retailers claim to offer only the “whitest moissanite” — but this is a misnomer and simply a marketing ploy.

Moissanite is a man-made diamond. FALSE.

Moissanite IS NOT a diamond nor a diamond simulant. Diamond is pure carbon [C]. Moissanite is composed of the compound silicon carbide [SiC] Moissanite is a laboratory created jewel. Naturally occurring moissanite is extremely rare and found only in microscopic crystals that are too small to use in jewelry. Each moissanite jewel is grown in the laboratory from a moissanite seed crystal. It takes months from start to finish to grow a single jewel. Created diamonds are grown by a similar process. 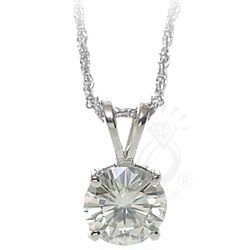 Save 50%: Round Moissanite Wire Basket Pendant

Round wire basket solitaire pendant with Charles and Colvard created moissanite on an 18″ rope chain.

Save 50% now on select sizes, use coupon code Discount 50 at checkout
While supplies last