Joseph Schubach Jewelers Blog » Jewelry Education and Advice » Made in the USA?

You see the label all the time. Or perhaps you see it less frequently than you remember. But what does “Made in the USA” really mean when it comes to your jewelry purchase? What if your necklace is made in the US but the gems were imported from India (as in the case below)?

These latest rulings will give you a clearer idea (hopefully) on the real meaning of the label: 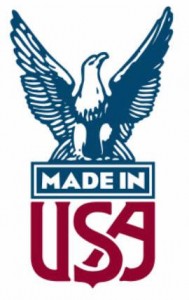 To illustrate the point, consider two example cases (loosely based on actual inquiries) addressed by the Jewelers Vigilance Committee (JVC) below.

In the first inquiry, a manufacturer’s representative asked the JVC if the company could advertise a white gold sapphire necklace produced in New England as “Made in the USA.” The sapphires for the necklace were cut, polished and imported as loose stones from India, but the findings and chain were from a U.S. source.

The second inquiry involved finished rings that were imported from Thailand, checked for quality control at their U.S. destination, then boxed and shipped to retail stores. The wholesaler asked if he was required to provide “country of origin” information on the rings by marking or other means.

Before you read about the outcome, it’s important to understand a little bit more about the prerequisites of a “Made in the USA” claim:

Even if the article is substantially transformed here, if the resulting product is then assembled or processed further, outside the United States, the FTC will not consider that product to be one that is “Made in the USA.”

So what happened in the cases mentioned above?

In the first matter, regarding the necklace, the imported material–gemstones–will be combined with domestically sourced materials to make a necklace. While the final manufacturing process will take place in this country, the gemstones were cut and polished in India. For that reason, a qualified origin claim, such as “Made in the USA of U.S. and imported material” is appropriate.  Had the stones been sourced from India in rough form, then “substantially transformed” here by cutting and polishing, a “Made in the USA” claim for the bracelet would more likely meet FTC standards.

As to the second inquiry concerning whether the Thai-made rings need origin markings, the one-word answer is “yes.” The imported rings must be marked, or tagged, as “Made in Thailand” to comply with U.S. Customs law.

The JVC provided the inquiring jewelers with information about the relevant law and guidance as to country-of-origin descriptions for their products.

Joseph Schubach Jewelers has taken “Made in USA” seriously for three generations. Nearly 100% of our jewelry has been produced right here in the states.