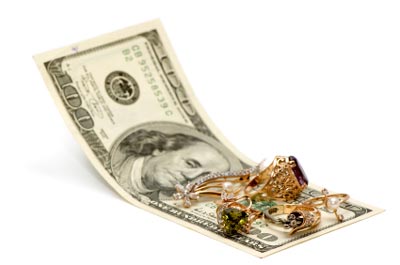 We’ve discussed the gold selling trend a few times in the last few months. But trends, in their usual fashion, are always changing. Here’s a recent article that details some pertinent information regarding selling gold. Remember, forewarned is forearmed. With our 100-year-old business, we understand buying and selling gold in all its complexities and all economical climates. Contact us directly if you’re thinking of selling your gold.

With the price of gold near record highs, many are selling their gold chains and broken pocket watches at Tupperware-style parties or by mail to outfits like Super Bowl advertiser Cash4Gold.

That could be a sign of the times – people are desperate for cash – or a sign that gold has more room to run.

“Bubbles never blow up without the American investor class being overexposed to the item that’s in the bubble,” says Nick Zaharias, a consultant to hedge funds who put 30 percent of his family’s assets in gold. If gold were near a peak, people would be buying, not selling gold at house parties and hotel rooms, he says.

If you want to cash in, here are some ways to avoid the Golden Fleece.

— Know the price. Gold is bought and sold at some percentage above or below the spot price, which changes constantly and can be found at sites such as Kitco.com or Coininfo.com. The more gold you sell, the better price you generally get. The price you see advertised might be what the dealer is paying for larger quantities, so be sure to ask.

Standard gold coins such as the American Golden Eagle, South African Krugerrand or Canadian Maple Leaf contain 1 ounce of gold and generally have no “collectible” value beyond their gold content, but check with a reputable coin dealer to be sure.

Robert Mish, of Mish International Monetary Inc. in Menlo Park, says he pays about 1 percent over the spot price for one or two such coins or 2 percent above spot “for reasonable volumes.”

With jewelry, don’t expect to get what you paid. “The retail markup is substantial, and a lot of the value is in the design and craftsmanship,” says Morningstar analyst Paul Justice. “If you melt it down, you will lose a lot of the value.”

Gold dealers generally won’t pay you for stones, so remove them before you weigh or sell your jewelry.

Gold that is 24-karat is considered pure, 18-karat is roughly 75 percent gold, and 14-karat is about 58 percent gold. In other words, one ounce of 14-karat gold contains about 0.58 ounce of gold. You can estimate the value of gold using the calculator at gold.yabz.com/jewelry.htm.

Just because gold is stamped 14- or 18-karat doesn’t mean it’s real gold. There are various tests to see if gold is real. One hint: Pure gold is not magnetic. Check with a reputable jeweler to make sure.

— Shop around: “Usually you are better off dealing with an established brick-and-mortar place rather than companies that spend three or four days in a hotel room and disappear.

The established person is dependent on return customers,” says David Lazier, assistant director of the California Department of Food and Agriculture’s division of measurement standards, which enforces the state’s weights and measures laws.

In undercover sales, “We found a wide difference between what Company A and Company B are willing to pay. Sometimes you can say ‘I think it’s worth more’ and they will adjust the price,” Lazier adds.

Last summer Consumer Reports sold identical 18-karat gold chains and pendants to three mail-order outfits offering cash for gold and to pawn shops and jewelry stores in three states. “The cash-for-gold companies paid 11 to 29 percent of the day’s market price for gold; the other venues, about 35 to 70 percent,” it reported.