The debate continues: when a consumer is informed about the very real ecological and political dangers associated with mined diamonds, will he or she purchase a diamond or choose a diamond alternative?

This recent study shows that slowly but surely, people’s minds are changing:

Paso Robles, Calif.–A new consumer survey conducted by MVI Marketing’s Jewelry Consumer Opinion Council (JCOC) showed that a small but significant percentage of respondents have decided to snub mined diamonds, and an even greater percentage are planning to seek out “created diamond” alternatives.

According to a release from the JCOC, the council conducted a study called “Consumer Perceptions of Created Diamond Alternatives,” which was completed by 1,478 JCOC panel members between the dates of Dec. 26 and Dec. 31, 2009.

The study exposed survey-takers to some brief introductory information about the concerns surrounding diamonds and why those concerns have prompted some consumers to choose created diamond alternatives, including lab-grown diamonds and diamond simulants, instead.

“Mined diamonds are mined from deep in the earth,” a concept introduction provided to survey-takers said. “This has some environmentalists concerned about the destructive nature of mining and the chemicals used. Others are concerned about profits from illicit diamond mining being used to fund the purchase of arms in war-torn countries and contributing towards human suffering. Because of these issues, many people have opted for created diamond alternatives available in fine jewelry instead of mined diamonds.”

The JCOC release said that after learning about issues related to mined diamonds, a majority of respondents have taken actions that indicate they may be buying fewer mined diamonds in the future.

According to the study, 11 percent of those who participated said they have decided not to purchase or request jewelry crafted of mined diamonds.

Eight percent said they won’t give mined diamonds as a gift and 18 percent reported that they have made family or friends aware of the issues.

A total of 16 percent of survey-takers said they seek created diamond alternatives when looking for jewelry.

“Clearly consumers are becoming more aware of the challenges faced in the mining of diamonds,” MVI Chief Executive Officer Mart Hurwitz said in the release. “It is only natural for the consumer to consider man-made alternatives if their concerns about those challenges grow.”

Moissanite, in our opinion, is a phenomenal product – highly comparable to diamonds – and exceeding in some characteristics. We sell moissanite because we recognize this societal shift and the importance in finding a diamond alternative for people concerned with global issues. 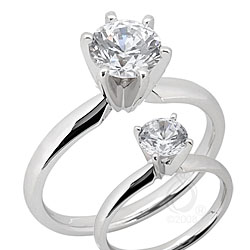