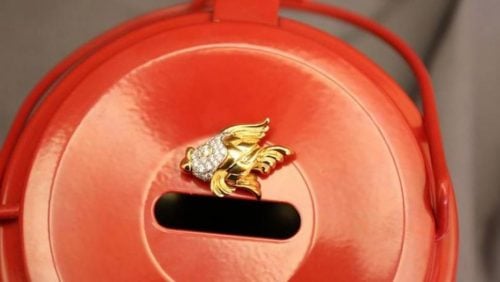 The red kettle of the Salvation Army has practically become synonymous with the holidays and a reminder that others are in need during this time of year. Though a recent trend shows that people aren’t just giving spare change. Some are donating expensive jewelry instead.

“A donor reached out,” said Salvation Army Director of Communications Drew Forster, “saying she wanted to donate a piece of jewelry. She was a little nervous that it was actually going to fit in the slot of our red kettle.”

The Salvation Army of Boston says that anonymous donor wanted to give a golden fish pin.

It stands to reason that people would donate jewelry. Many of us have expensive pieces of jewelry occupying space in a dusty jewelry box when it could go to better use.

So happy holidays and kudos to all you jewelry lovin’ charitable folks out there!