We’ve seen subdued years, trust me. You know, diamond stud earrings or bare necks. The light touches were effective, sure. But we expect more from the Oscars, don’t we? We want pomp, circumstance. We want frill and feathers. We want fun! This year, we weren’t disappointed. This year, the jewelry extrovert was highlighted:

Scarlett Johansson (looking non-plussed after surprise kiss from John Travolta) pretty much stunned everyone with a large bib emerald necklace that ran from the top of her neck to her chest. I’m still trying to find out the creator of this show stopper (Bulgari?). She matched the necklace with Piaget Mediterranean Garden ear cuff set in 18k pink gold with five pear-shaped emeralds, 278 brilliant-cut diamonds, four pear-shaped aquamarines and two pear-shaped green tourmalines.

Lupita Nyong’o may have out-done everybody with a white Calvin Klein gown adorned with approximately 6,000 white pearls, which were reportedly a mix of fake and real.

Anna Kendrick wore a diamond collar of five rows matched with marquis and pear-shaped diamond cluster earrings totaling 13 carats, reportedly by Norman Silverman. The necklace was tucked into the neckline of her gown.

Cate Blanchett went with a multi-row turquoise necklace by Tiffany & Co. In contrast to other bold necklace statements, Jessica Chastain went with a delicate and refined diamond necklace by Piaget. The actress was recently named a brand ambassador for the luxury jewelry and watch brand. 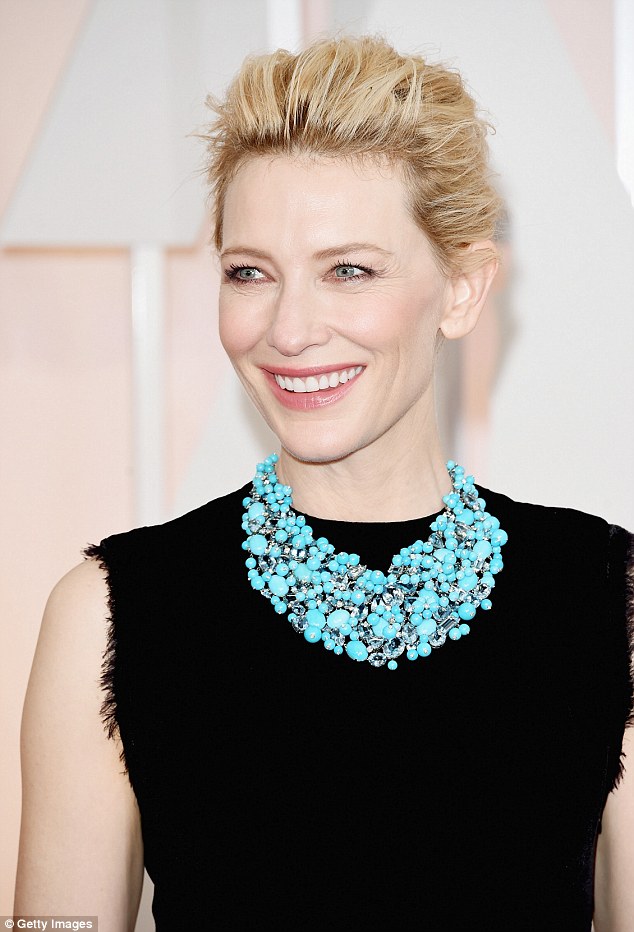