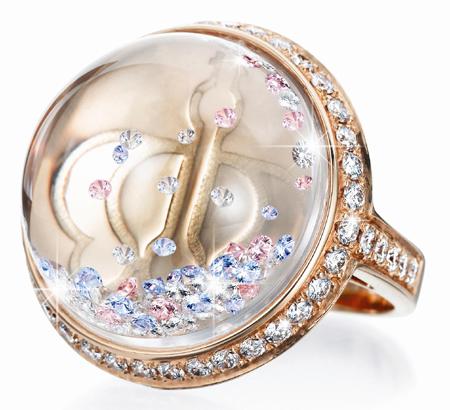 The “Diamond Jubilee Stars” is based on the same design introduced in 2009 that incorporates a clear half-sphere or full-sphere made of sapphire crystal filled with tiny diamonds. The crystal shells are filled with a clear silicone, which allow the diamonds to float inside the sphere jewelry in the same manner that paper confetti floats inside a snow globe.

The newest collection consists of a ring and pendant made of 18k rose gold. The half-sphere of the ring contains a total of 2.12 carats of white, blue and fancy pink floating diamonds. The full sphere of the pendant contains 4.91 carats of white, blue and fancy pink diamonds. The colors of the diamonds resemble the three colors of The Union Jack, the British National Flag.

The Diamond Jubilee Stars are available in an exclusive edition of six pieces, each with its own serial number and certificate and are only available at Harrods, London.