“Only a connoisseur with an eye as refined as that of Mrs. Lily Safra could have collected such an ensemble of jewels, and only someone with her philanthropic conviction could have expressed such powerful support to worthwhile causes in all charitable fields,” – François Curiel, International Head of Christie’s Jewellery Department 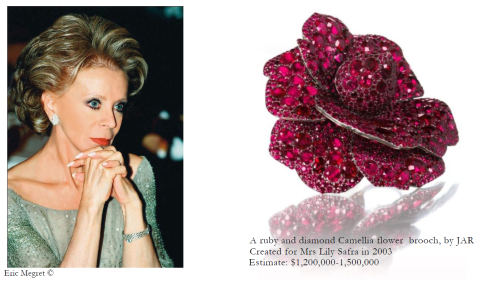 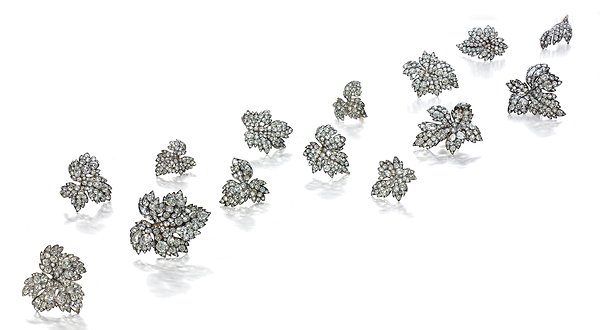 Lily Safra’s auction of her personal jewelry in Geneva in May includes this set of twelve antique diamond leaf brooches and a pair of ear clips from the mid-19th Century.

The jewelry collection of famed philanthropist, Lily Safra, will be up for auction at Chrisite’s Geneva on Monday May 14, with all proceeds to be donated to 20 different charitable institutions. The collection includes the largest single-owner selection of jewels by JAR ever to be offered at auction.

Regarded as a major philanthropist, Safra is also a discerning connoisseur. This jewelry collection reflects her refined taste and its evolution through five decades, from the 1970s to the present day. Featuring 70 lots, the sale at the Four Seasons Hotel des Bergues is estimated to fetch more than $20 million. It includes important diamonds, rubies and sapphires, as well as an outstanding array of fine antique and period jewelry.