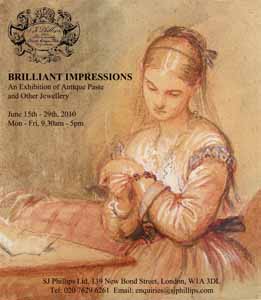 You’ve heard the expression – all this glitters is not gold. Nowhere is this more true than this latest exhibit in London, showcasing some of the best of the best in fake jewelry throughout history:

“Brilliant Impressions: Antique Paste & Other Jewelry,” from June 15 to June 29 at S.J. Phillips, an antiques and silver dealer in London, is a charming, slyly subversive exhibition of 146 pieces of paste, “Vauxhall glass” and semiprecious jewels that tell the flip side of the story: How women with more style than means adorned themselves in the 17th, 18th and 19th centuries.

“Each of these pieces that has survived is by no means run-of-the-mill,” said Diana Scarisbrick, a world-renowned jewelry historian who wrote the exhibition’s catalogue — to which Anna Wintour, editor in chief of American Vogue, provided a foreword.

“The majority of the pieces are from the 18th century, a very high point in jewelry design, and the pieces are set the same as you’d find with beautiful diamonds,” Mrs. Scarisbrick said.

Mostly sourced from an anonymous English collector, the false jewels in the exhibition attest to a tradition of craftsmanship and beauty to rival that of the genuine jewels from which they took their inspiration. They offer a powerful testament to the timelessness of certain styles of adornment, in particular, those that offer substantial looks at modest prices.

Many of the pieces in the exhibition would be indistinguishable from today’s statement jewels, including a Carmen Miranda-esque pair of girandole pink and white paste earrings that date to the early 18th century, and a dramatic bib necklace of bullet-shaped beads composed of French jet, the black glass version of the organic gem that once littered the shores of Whitby, in north-eastern England.

At their best, the pieces in the show feel pregnant with history, as with a late 18th century aigrette, or plume-like ornament, composed of chrysoberyl and tawny topaz discovered during Portugal’s mid-century foray into the mineral-rich Brazilian interior. At £20,000, or about $29,000, the aigrette, designed as a headdress decoration, is the exhibition’s most expensive piece. The oldest is a cluster pendant of rose-cut rock crystal dating to 1670.

“It’s the first exhibition of its type and quality that’s been done,” said Francis Norton, a director of S.J. Phillips. 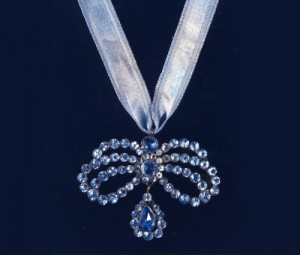