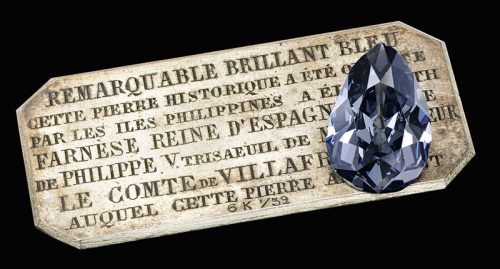 Most gems of this magnitude have a storied history. And the stunning 6-carat Farnese Blue Diamond is no exception.

Passed on to generations of Spanish royalty, the Blue Diamond makes it way to the auction block soon. “The Farnese Blue” will be offered at the Magnificent Jewels and Noble Jewels sale at Sotheby’s Geneva on May 15 where it’s expected to sell for between $3.7 million and $5.3 million.

According to the National Jeweler:

It was uncovered in the Golconda mines of India, which also produced the famous Hope and Wittelsbach diamonds.

The stone was given to Elisabeth Farnese, Queen of Spain (1692-1766) and descendant of Pope Paul III, following her wedding to King Philip V of Spain, grandson of Louis XIV, King of France.

The wedding was celebrated in Parma, Italy in 1714, after the War of the Spanish Succession, which had depleted the country’s finances. To be able to offer a suitable dowry for the new queen, the Spanish government sent word to its colonies, demanding they send wedding presents to Madrid.

[Read more about its lengthy and fascinating history.]