Joseph Schubach Jewelers Blog » Jewelry Education and Advice » Why is there a Pineapple on the Wimbledon Trophy? 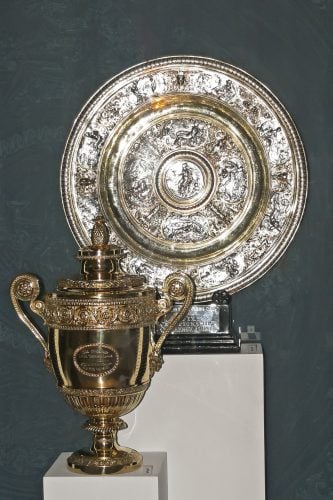 No, you can’t wear a trophy around your neck or on your finger, but its made of metal (silver gilt) and certainly makes for a killer adornment.

So as we say goodbye to a blazingly exciting week at Wimbledon, the oldest and most prestigious professional tennis tournament of the world, let’s take a look at the prize trophy for the men (since women receive a dish).

The head of the trophy has a pineapple on the top, which has an interesting and hazy history. According to the Express:

A spokesperson for the Wimbledon Museum told Express.co.uk that there are “very few facts” about the pineapple’s origin, but they believe it dates back to the fruit’s use as a symbol of “honour, welcoming and celebration”.

The spokesperson said: “In the 17th century pineapples were impossible to grow in the UK and they had to be imported, so being presented with one at a feast was seen as a great compliment.

“You might have seen pineapples being used on gateposts of stately homes as you travel around the UK. It’s because of their rarity.

Sure, it still seems odd. Pineapples and tennis? Hmm…well, regardless, it looks awesome on top of one of the most revered trophies in sports history.