Practically every culture lays claim to a particular style of jewelry making, with no culture being exactly like another, yet many having distinct similarities. Celtic jewelry possesses its own powerful and mystical beauty, unmistakeable and distinctly its own.

The origins of this amazing jewelry date back to somewhere between 2000 BC to 550 AD. This is when silver and gold were used by Celtic craftspeople and adorned with Celtic symbols. Silver (commonly associated with the moon) was often used for Celtic torques and bracelets, whereas gold (very rare and precious in those days) was reserved for the wealthiest society members.

Much could be written about various Celtic symbols, but for sake of ease, let’s focus on the most common:

Celtic knots or interlaces are one of the instantly recognizable hallmarks of Celtic jewelry. Tracing the line of one thread of most Celtic knots, for example, reveals that the thread is unbroken, returning over and over again to complete its path. The organic form of Celtic knots as revealed in bracelet patterns throughout the centuries symbolizes one’s strong connection to nature and the cosmos.

Incredibly, 25 centuries later (!), this same intricate symbolism can be seen in modern day jewelry. If you’re interested in your own Celtic piece of jewelry, talk to us about your ideas. We’re happy to custom design a piece especially designed for your spirit and personality. 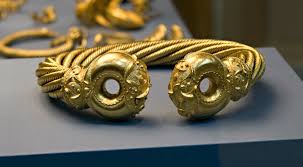 The Snettisham Hoard Great Torc. The torc is one of the most elaborate golden objects from the ancient world. It is made from gold mixed with silver and weighs over 1 kg. Torcs are made from complex threads of metal, grouped into ropes and twisted around each other. The ends of the torc were cast in moulds and welded onto the metal ropes.