Michele Obama – or for that matter, most First Ladies – are seen as fashion plates. Just as the red carpet in Hollywood and Fashion Week indicate upcoming trends, so does Michele Obama. So what has she been bejeweled with as of late? A lot, apparently! 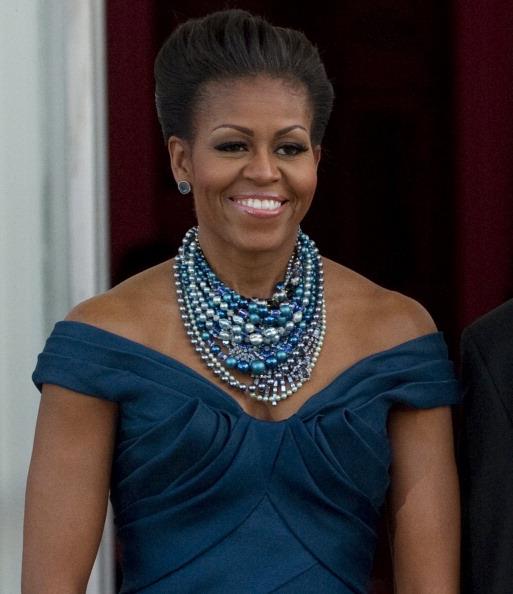 According to Jewelry Insider:

Michelle Obama “brought out the Binns” to light up the State Dinner honoring British Prime Minister, David Cameron and his wife Samantha, and I literally stopped in my tracks when I saw her on the news.
The Divine Mrs. O set off her stunning teal Marchesa dress with a Tom Binns statement necklace made from a bonanza of teal, blue, silver and white pearls layered over a giant rhinestone piece, according to USMagazine.com.

“I love the addition of texture with the Tom Binns necklace,” Roksanda Ilincic, who dressed Obama for the evening, told reporters.

AND – she topped off the look with geode stud earrings by none other than Kimberly McDonald .