Jewelry and hair have long gone together. Think Cleopatra or the Queens of England. Or closer to home, sparkling barrettes or gem-studded clip-ons. This designer goes one step further. Hair is part of the jewelry (again a concept that has been around since people placed a lock of hair in a pendant or locket.

PARIS — Curly wigs of orange, royal blue or butter yellow curls — as if in some mad movie — acted as nests for jewelry as the indefatigable and imaginative Delfina Delettrez introduced her latest collection: “Love Is in the Hair.” 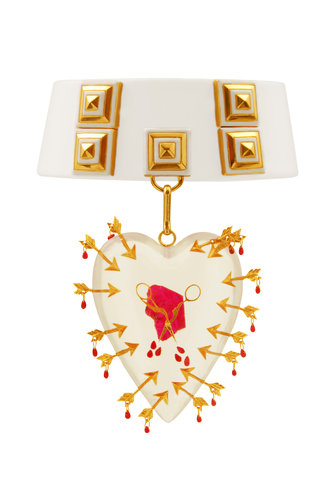 (A piece from “Love Is in the Hair,” a new jewelry collection by Delfina Delettrez.)

The name was not just taken at random. The concept of the designer is to encase the hair of loved ones, as was done in the Victorian era, but in a heart-shaped in transparent resin rather than in a locket or brooch. Her daughter’s hair and a lock of the designer’s own tresses became wearable memory sticks, filled with fantasy.

“I wanted to return to the origin of jewels,” said the designer. “And I have always been obsessed with hair — especially men’s, when the larger the hair, the greater the power.”

Ms. Delettrez also played with rings, dangling a miniscule pink-silver purse on one finger, claiming, “It’s good for parties,” and creating an animalistic ring that slips over two fingers, leaving the leopard free to move his tail across the hand.