It seemed like only yesterday we were watching grow up in the Oval Office. Now, she’s grown up and marrying a college beau.

Chelsea Clinton and Marc Mezvinsky were married in an interfaith ceremony on July 31, 2010, at the Astor Courts Estate in Rhinebeck, New York. The estate was built by John Jacob Astor IV in the early years of the twentieth century, and sits on the Hudson River, a couple of hours north of New York City.Chelsea’s wedding jewelry included diamond earrings — each earring was made from two clusters of diamonds set to resemble small flowers. Her diamond bracelet repeated a single version of the floral setting.

Chelsea Clinton’s engagement ring is partially obscured by her bouquet, but the ring appears to be fashioned from a princess, emerald or Asscher cut diamond set in platinum (About Square & Rectangular Diamonds)

The floral appearance of Chelsea Clinton’s diamond earrings was repeated in the design of her diamond “tennis” bracelet. 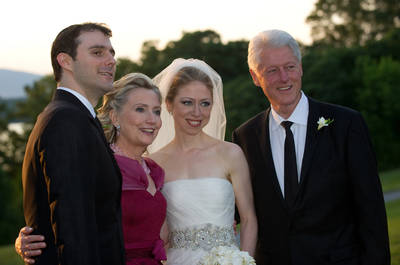