Last year, according to the Federation of the Swiss Watch Industry, Swiss watch exports rose 10 percent from 2011 to total 21.4 billion Swiss francs, or $23.2 billion. Of that figure, Asia’s market share was 54 percent, or 11.6 billion francs, though the market barely grew, and some parts of it shrank. (Source: NY Times).

This is having an interesting effect on the styles of watches being made by some of the top designers:

The Dutch independent watchmaker Kees Engelbarts, now based in Geneva, is one of the leading exponents of a style heavily influenced by Asian art and craftsmanship.

A renowned engraver who set up as an independent in 1997, Mr. Engelbarts specializes in Mokume gane, a mixed-metal laminate technique that he learned in Japan in the 1990s. The technique goes back to traditional sword making, in which hot metal was folded into layers, then shaped by hand. Mr. Engelbarts has used it for nearly two decades to create Asian-inspired motifs in his handmade timepieces.

“I play with Asian motifs like the dragon, the tiger or the serpent because I can use my imagination in the design,” Mr. Engelbarts said by phone from Geneva.

“In the past 10 years, I have sold most of my production in Asia,” he said. 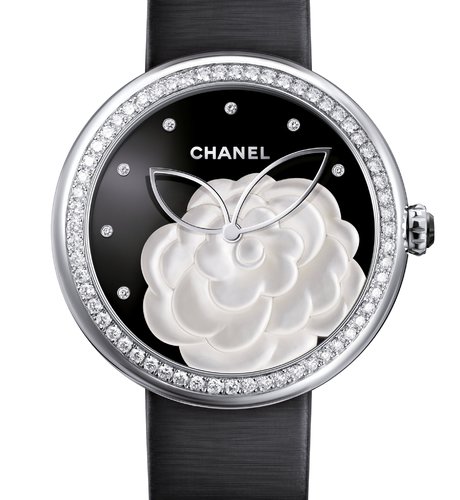 One of the hand-decorated timepieces, featuring a trademark camellia, in Chanel’s Mademoiselle Privé collection.