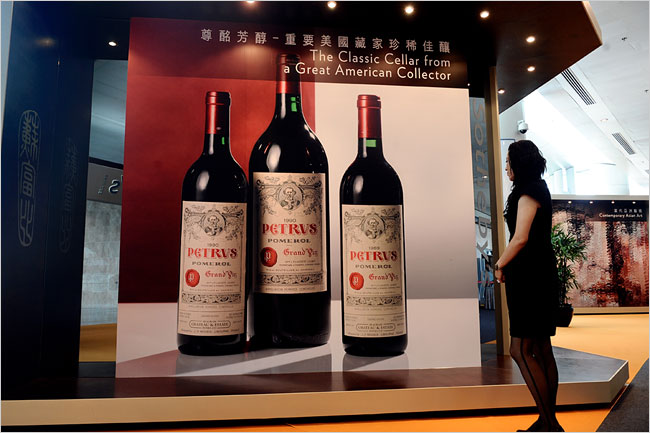 A billboard advertising the recent Sotheby’s auction of a wine collection at the Hong Kong Exhibition and Convention Center.

In what the New York Times is calling a “tectonic shift,” luxury goods traditionally auctioned off at houses based in New York City or Geneva are now moving the activities to Asia. This includes the upcoming auction of the bubble-gum 5 carat “Vivid Pink” diamond, which will take place in Hong Kong:

Christie’s and its rival Sotheby’s say that within the past few years, their hub in Asia, in the financial center of Hong Kong, has emerged as a top location for their sales of top-dollar jewelry, gems and fine wines. Asians have also become major buyers of ultraluxury goods at the auction houses’ sales in cities like London, New York and Geneva.

Rolls-Royce, which did not even have dealerships in Asia until 2003, immediately got 20 orders for its new $250,000 Ghost when it presented the car in Hong Kong last month, despite taxes that effectively double that price.

For Christie’s and the others, moving auctions and business to Asia is a calculated decision reflecting the shift in the consumer base.

In May last year, Christie’s sold its clear 101-carat Shizuka diamond in Hong Kong for $6.2 million. That sale and the one coming Dec. 1 of its big pink diamond “are both great examples showing how important this market has become at the very top end,” said Vickie Sek, head of jewelry at Christie’s Asia.

“Both stones would have been offered in New York or Geneva just a few short years ago,” she said.

Hammered by the financial crisis last year, many of the world’s economies are struggling to grow. Billionaires in Russia and the Middle East are taking a hit from lower oil prices. And consumers in the world’s traditional spending powerhouse, the United States, are weighed down by debt and expected to be much more cautious about opening their wallets for quite some time.