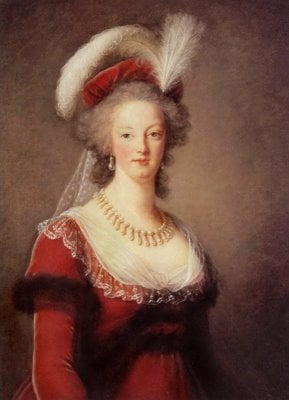 At Joseph Schubach Jewelers, we  like to look back on history for jewelry inspiration. Because strangely, everthing old IS new. There’s undoubtedly a common thread that continues through time, disappearing, reappearing, reinvented into something new.

Today, we take a look at Marie Antoinette and some of her elaborate pieces, including her stunning pearl neckalce:

Once queen, she steadily ordered the newest looks from Rose Bertin, the leading Paris couturiere—among them the provocative “robe a la polonaise,” with its bosom-enhancing bodice and its billowy, ankle-baring skirts, the whole crowned by a “pouf,” a 3-foot mountain of powdered hair decked with plumes, veils, and other objects arranged as saucy references to current events. All this and more she wore at court and in town, with swiftly contagious effect; and Bertin became known as the Minister of Fashion. 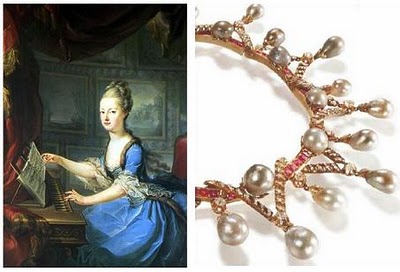 Christie's employee Linda Pyke is dressed with a necklace, made of pearls belonging to Marie Antoinette, at Christie's Auction House in London September 27, 2007. The pearls once belonging to Antoinette and taken to Britain by a friend for safekeeping failed to find a buyer at auction on Wednesday. Credit: Reuters/Luke MacGregor

The history of the necklace:

Now part of a diamond, ruby and pearl necklace, France’s ill-fated queen gave a bag of pearls and diamonds to Lady Sutherland, the British ambassador’s wife, before she fled revolutionary France in 1792, a year before the monarch’s death.

Marie Antoinette, legendary for her extravagance, did not know her fate at the time and would have hoped to be reunited with her treasures one day, according to Christie’s officials.

Christie’s said Sutherland arranged for clothes and linen to be sent to the queen while she was in prison.

“This was reportedly the last gesture of kindness shown to the doomed queen,” the auctioneer said in a statement.

Marie Antoinette was executed by guillotine in October 1793.