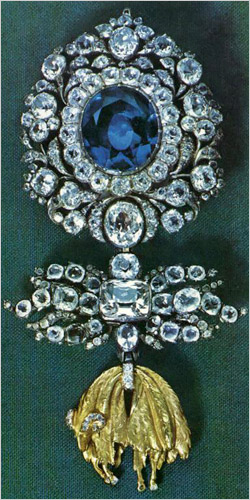 The Wittelsbach diamond, a 35.56-carat fancy deep grayish-blue diamond with a long history, was among the gems slated for auction at Christie’s “Jewels: The London Sale” last month. What was the asking price? Read on:

Officially known as “Der Blaue Wittelsbacher,” the diamond is one of the few that can claim 17th-century heritage.

The diamond subsequently became part of the Austrian and then the Bavarian crown jewels.

The diamond has been part of a private collection since 1964, and its appearance at the upcoming Christie’s auction marks its first offering to the international market in nearly 80 years.

“It is a great honor and a lifetime dream to handle a museum-quality stone such as the Wittelsbach,” said Francois Curiel, chairman of Christie’s Europe and international head of jewelry. “The appearance of a large blue diamond, among the rarest of colors, with a history that can be traced back to the 17th century and 300 years of royal connections will surely be a thrilling occasion for all collectors of exceedingly rare jewels and works of art.”

So what did the historic diamond go for? How about a record-setting $24.3 million! Recession? What recession?

“In the midst of these challenging times, we were thrilled to achieve an historic price for an historic diamond,” said Francois Curiel, chairman of Christie’s Europe and auctioneer for Wednesday’s sale.