What is a garnet?

Garnet is not one single mineral per se but is used to encompass a group of several closely related silicate minerals. Garnets are widely known as dark red though come in a variety of colors, including red, orange, yellow, green, purple, brown, blue, black, pink, and colorless.

According to Middle English, the word itself means “dark red.” In Latin, garnet is derived from the word “granum” meaning “seed” possibly referring to a pomegranate seed for which it is quite similar in color and shape.

The garnet’s history extends back to the Bronze age. Garnets were used as beads in a jewelry dating back to 3000 B.C. This gives us an idea of its durability and strength.

Symbolically, it represents the feminine nature (some say that only women should wear garnet). During medieval times, garnets were believed to cure depression, protect dreamers from nightmares and relieve diseases of the liver. It was also thought to be potent against poisons.

Garnet is the official birthstone for January. It is also used to celebrate the 2nd anniversary of marriage. 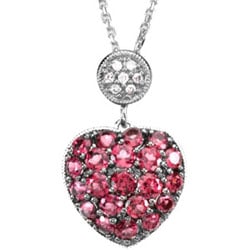