By now, you know our love of moissanite, which is a lab-created diamond. Not only is it highly durable and brilliant, but eco-friendly. It’s one of our favorite gems to work with. This lab in Japan, using a similar process to the creation of moissanite, created the first perfectly spherical diamond. Read on: 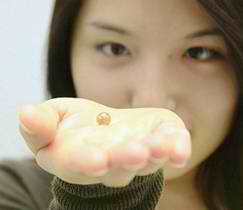 A team of researchers at Ehime University in Japan say they have created the world’s first perfectly spherical diamond, according to a media report.

The state-run university’s Geodynamics Research Center said it has processed an artificially produced diamond, of a variety the center has named Hime, into a perfect four-carat sphere with a diameter of 7.5 millimeters.
The potential applications of the technology used to shape an artificial diamond into a perfect sphere are expected to be widespread, the researchers said in a report in The Daily Yomiuri.

In 2003, the research center synthesized a tiny grain of Hime diamond measuring less than 1 millimeter wide. The centre combined carbon atoms by subjecting them to 150,000 times the standard atmospheric pressure and temperatures of 2,300 C.

By last year, the research team had become able to create Hime diamonds up to 1 centimeter wide, they said.

Hime diamonds are far harder than naturally formed diamonds. They have a uniform degree of hardness throughout their structure, whereas this changes in different parts of a natural diamond, according to the centre.

From the Antwerp Facets Newsletter…