Joseph Schubach Jewelers Blog » Jewelry History » The Congressional Medal of Honor – What is it and What’s it Made of?

During another tumultuous week in the U.S. Congress, we decided to take a breather from the tensions and reflect on something more positive: a medal that honors those Americans who perform exceptionally valorous military duties.

First, let’s set the record straight on its name. The official title is simply the Medal of Honor, not the Congressional Medal of Honor. (The confusion regarding the name may come from the fact that the president presents the award “in the name of Congress.”)

There are three versions of the medal, one for the Army, one for the Navy, and one for the Air Force. Each one is created differently. The components are made from gilding metals and red brass alloys with some gold plating, enamel and bronze pieces.

There was an attempt in 2004 to upgrade the materials (to be 90% gold, which is the same composition as the lesser-known Congressional Gold Medal), but unfortunately, the measure was dropped. Regardless of its simple components, we honor its powerful beauty and more importantly, what it represents. 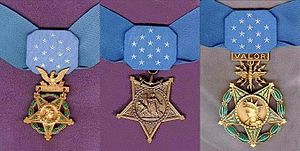