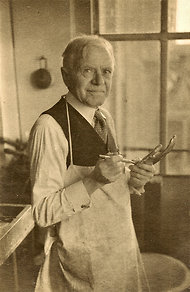 You may have never heard of Gustav Manz but you may have seen his work. Unfortunately, it was often behind the stamp of Cartier or Tiffany’s. But after decades, Gustav Manz is getting the recognition he’s due.

The jewelry maker Gustav Manz produced thousands of works in gold, silver and platinum, operating a Manhattan workshop from around 1901 to 1944. But his name shows up hardly anywhere.

He designed for higher-profile outfits including Tiffany & Company and Cartier, which put their own stamps on the precious metal. Only now are unmarked wares by Manz (pronounced Mahnz) finally receiving their due.

“Maybe he’s a little vindicated,” said Courtney Bowers, a historian who wrote her 2008 master’s thesis on Manz for a graduate program run by the Cooper-Hewitt museum and the Parsons school. During an interview at her family’s Manhattan jewelry workshop, she sported Manz gold rings with leaves engulfing turquoise and freshwater pearls.

Check out website dedicated to Gustav Manz and his work. 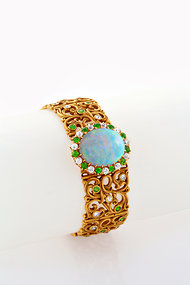 A garnet and opal bracelet by Gustav Manz and offered by Macklowe Gallery.