Cubic Zirconia has a bit of a bad rap. It’s often considered a cheap and obviously fake diamond alternative. But it has an interesting history and deserves props for being one of the many steps to smarter diamond alternatives today.

So where did cubic zirconia come from? According to LovetoKnow.com:

In 1937, two German mineralogists made an important discovery in Cubic zirconia’s history. The scientists found that melted zirconium oxide contained cube-shaped crystals. While this was a unique characteristic to any mineral, the men didn’t understand it as being anything useful since the same properties also existed in the mineral’s natural state. That redundancy seemed inconsequential to both men, and so they simply ignored their find. As with all scientific discoveries, the honor of naming the object or process is given to the one(s) making the discovery. In this case, neither man even considered naming their find, so cubic zirconia retained its scientific name. The world continued to overlook the mineral and its potential for several more decades.

It wasn’t until decades later that scientists”rediscovered” this simulated diamond, while searching for a less expensive material to be used with lasers and industrial applications–not for jewelry yet.

Finally, in 1977, Russian scientists discovered how to grow these crystals using a synthetic process. They named this synthetic crystal “Djevalite.” Under this name, they began to market them as simulated diamonds which took the jewelry world by storm at first.

CZ possesses two traits that prevent it from having an identical appearance to diamonds: CZ has more sparkles in rainbow colors than diamonds and also has more fire. CZ is more brittle and softer than a diamond. Regardless, it gave consumers the opportunity to wear a lot more bling for their buck.

Over the years, CZ has underwent some “bad press” because of its earlier cheap and often yellowish or greenish tints but, like other simulated diamonds, these synthetic gems have come a long way and seen substantial improvements in look and quality. 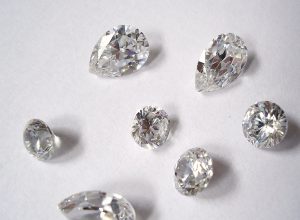